According to a recent report by the Oxford Säid and Cambridge Judge business schools, less than one per cent of the 600,000 companies registered in the UK since 2012 have scaled or grown by more than 20 per cent in revenue or headcount over a three-year period.

From my perspective, skillset isn’t considered as much as it could be. It is not easy to be an entrepreneur – for anyone. I didn’t just roll up and expect it all to happen. It is about having the mind set to work hard – harder than anyone else in the business – and to cope with the rigours of the knock backs that will come. You will quite possibly hire the wrong people, start in the wrong market with the wrong tech platform and potentially get it all wrong at the same time. Life sometimes does that.

I have about 15 years’ experience of setting up and running three different businesses, each one bigger than the one before and each one needed a bigger skillset.

My early career had nothing to do with being an entrepreneur. I received a first-class honours degree in molecular genetics at King’s College London after a career in journalism, including a period as news editor for ITV’s Good Morning Britain. That experience taught me to ask good questions. I didn’t realise I had the makings of an entrepreneur until I met other people like me through the Entrepreneurs Organization, which is a peer-to-peer network for business owners. The other members of EO had the same mindset as me: risk takers, determined, optimistic, good with people, networkers, relentlessly curious. I had found my tribe: what a relief! I still needed the skills.

Specialist training programmes through EO, like the Entrepreneurial Masters Programme in Boston, helped to develop my skills and to develop my network. One of the teachers on the masters’ programme became one of our early investors.

Being a female entrepreneur means, unfortunately, I’m in a minority. There are still usually 70% men in the room at an EO event, which has to change. Female entrepreneurs are typically natural bridge builders and collaborators, who make great things happen, often unnoticed. Many of the most successful ones are humble and gracious, working tirelessly behind the scenes to support the next generation coming through.

On my journey, I have met fantastic mentors through the Cass Entrepreneurship Fund, run by the wonderfully sharp Helen Reynolds, and the Entrepreneur Academe, which has a mentoring programme for female-led tech businesses that I was lucky enough to join last year.

But whether male or female, the biggest challenge for most entrepreneurs is to remain focused on the number one goal right now and to smash it before moving onto the next goal. For ideas people (which most entrepreneurs are by definition) it’s all too easy to get carried away by the next bright shiny thing and to lose focus on the right thing, right now.

In the case of Raremark, having raised a seed round of £680,000 and quickly grown a team, we are ready for the challenge. It is the ability to hit one goal and then go for the next that separates the real success stories.

One of the major failings for start-ups is actually not about the idea or even the founding team. Instead, it is about the skill to bring in the right people. Clearly, inspiring the talent to take the plunge and to come and join you goes beyond whether you are a man or a woman. The best people are really looking for an opportunity to believe in you and your vision.

Inspiring a team is a huge part of the job. Knowing how to see everyone’s strengths and work with their strengths is essential too. Each team member has to improve every process rather than run medicore systems just because that’s the way we’ve always done it. It’s a mindset of constant improvement. Embracing the opportunity and pushing yourself to do better each day is exciting but it’s not for everyone.

I’m a firm believer that entrepreneurs are made and not born. Some learn the skills to run a lifestyle business, some learn the skills to run a growth business. Fundamental to both is a thirst for learning, a readiness for a challenge, a willingness to work hard and with others. There is so much to be done and we are only in the foothills of the tech revolution, certainly in health. We need every entrepreneur to help create the future: both men and women. 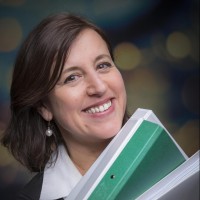 Julie Walters is the Founder of Raremark, which helps families affected by a rare disease find helpful information and connections.